An international aikido seminar led by female instructors from the Netherlands, Romania and Slovenia took place in Ljubljana's Dokiai dojo under the auspices of the Erasmus + project GendAi. After the seminar, an international group for gender balance in aikido including representatives of the Aikikai Association of Slovenia met. 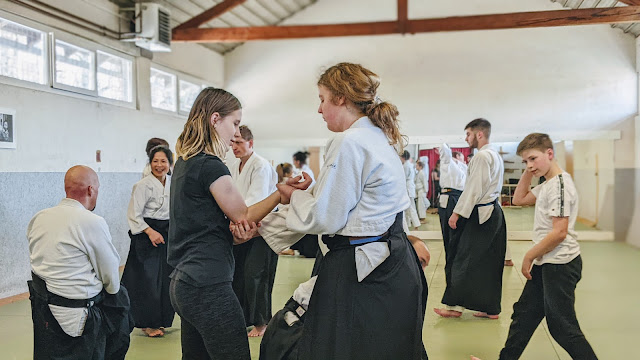 On Saturday, March 19, 23 aikidokas from four European countries met at the Dokiai dojo in Ljubljana, where the Aikikai Association of Slovenia hosted an international aikido seminar. It was led by female instructors from three countries participating in the international GendAi project, funded by the Erasmus + program. The national Aikikai federations of Romania, which is the leading partner of the project, the Netherlands and Slovenia in cooperation with the EAF (European Aikido Federation) promote gender balance in aikido and highlight female aikido instructors. In this way, they try to attract girls and women to learn about aikido, and present aikido masters as role models to all aikidokas. Everyone can learn a lot from the differences between women and men, based mainly on their physical characteristics, which are both an advantage and a disadvantage.

The project partners met for the first time in September 2021 in Amsterdam, where a seminar could not be held due to measures to prevent the spread of coronavirus. Then, in November 2021, the Romanian city of Cluj-Napoca hosted the second of four planned international events on gender in aikido culture – the International Gender Event, in which the international aikido seminar was conducted by leading French instructor Micheline Tissier Shihan, 6. Dan. Then, in March 2022, representatives of partner countries in the GendAi project visited Ljubljana. The international aikido seminar was led by instructors Satomi Ishikawa, 5. Dan from the Netherlands and Irina Gaspar, 4. Dan from Romania, and was attended by Staša Pisek, 3. Dan, who represents the Aikikai Association of Slovenia in the project. The last international event under the auspices of the GendAi project will once again be hosted by Romania.

International aikido instructor Satomi Ishikawa answered some questions related to gender balance in aikido after the seminar. She recounted the presence of women in aikido throughout history. As in other martial arts, initially, mostly men practiced aikido, but soon women also joined. Some of them also trained under the mentorship of O Sensei Morihei Ueshiba himself. Today, the female population in aikido is quite large.

However, compared to men, there are not many high-ranking instructors in the international aikido community, nor are there many women involved in the management of national and international aikido organizations and federations. She said gender differences on tatami mats stem from the physical characteristics of men and women, with women usually being weaker or more fragile. However, this is in a way their advantage, as they need to be more consistent in performing techniques to achieve the same effect as someone who has a lot of power to push, pull, lead an opponent. Satomi Ishikawa grew up with martial arts, which gave her self-confidence, discipline and inner strength. In the last part of the interview, she told how she encourages girls, younger and older women to learn aikido and accept this martial art as a lifestyle.


We also recorded a conversation about gender relations in aikido with Irina Gaspar, who says that the differences between aikido do not actually come from gender but from body type and spirit. She told how aikido marked her as a woman and helped her grow up. She also shared her views on opportunities to involve women in aikido.

As in September last year in the Netherlands and in November last year in Romania, members of the GendAi project consortium met in Slovenia in March this year. In addition to Irina Gaspar, project manager, Satomi Ishikawa and Staša Pisek, the meeting in Ljubljana was also attended by EAF representative Gergő Pasqualetti, 5. Dan, who coordinates European projects under the auspices of the European Aikido Federation. »Today, one of the biggest challenges not only for aikido but also for other martial arts and sports, is that fewer and fewer people are active. Especially in martial arts, more men than women are active based on their tradition. The GendAi project aims to design and implement measures to encourage women to participate in and persevere in aikido, as well as to promote female aikido instructors as role models for both men and women,« he said in an interview about the project and his views on gender in aikido.

At the meeting, the project partners got acquainted with the current activities in individual organizations and reviewed the activities that are still planned. The news that the GendAi website will be completed soon was welcomed. However, they have started planning the last meeting, which will take place in September this year in the Romanian city of Cluj-Napoca. They will conduct another seminar and meet again.

What are the impressions of Staša Pisek, a representative of the Aikikai Association of Slovenia, after the meeting in Ljubljana? »Although we had to adjust the event and I was besieged with a covid a week before Saturday, which made it impossible for me to train or teach, the day was very successful. We didn’t know how many participants would come, but in the end, it was just the right number. Slovenian guests were happy with an event that was free of charge. It was nice to train in an international group after a long time, as we have missed this in the last two years. Foreign guests were grateful for our hospitality and organization. The instructors had good accommodation near the dojo and near the centre. On Saturday night, we also met for an informal dinner, where they said that it is clear that we need more technical training and that it is nice to see the young generation that has come to train. The high number of female participants was also gratifying.«
Aikido demonstracija Satomi Ishikawa, 5. dan, 19. 3. 2022 v Ljubljani. 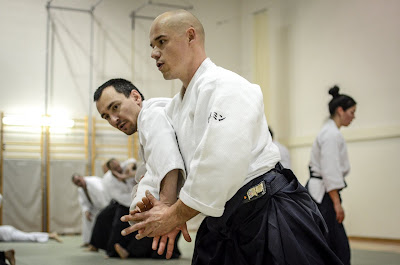